July 14 – August 22:
The Complete Works of William Shakespeare (Abridged)
by Adam Long, Daniel Singer, Jess Winfield
Glimmer Globe Theatre returns to an audience favorite, the rollicking Shakespearian comedy that helped launch our company a decade ago… featuring all 37 plays in 97 minutes! Three madcap actors weave their wicked way through all of Shakespeare’s comedies, histories, and tragedies in one wild ride that will leave you breathless and helpless with laughter. An irreverent, fast-paced romp through the Bard’s plays, THE COMPLETE WORKS OF WILLIAM SHAKESPEARE (ABRIDGED) was London’s longest-running comedy.

August 23 – August 29:
Glimmer Globe Theatre’s: Shakespeare Revue!
This LIVE collaborative performance will present a selection of monologues and scenes from across the Bard’s body of work, as performed by our talented community of local performers! This opportunity will be open to both individual performers and small groups.

July 3 – August 28:
The Templeton Players Present: Two 19th Century Farces!
This season, we’ll be presenting two 19th century farces for our audiences at The Farmers’ Museum on Saturdays and Sundays through July and August. Rehearsals will take place from mid-May through June. We plan to present a duo of audience favorites from years past, and will be adapting them to ensure the safety of our performers and audiences. 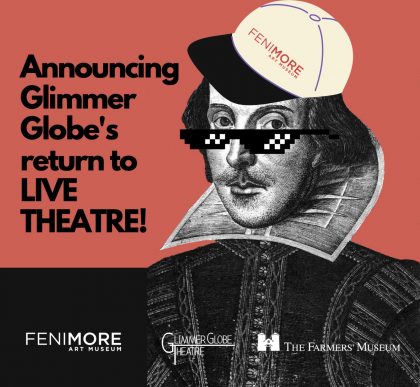