Our Glimmer Globe Theatre is thrilled to announce details of our upcoming Shakespeare Revue, newly formatted as a virtual series premiering on Fenimore/Glimmer Globe social media!

Beginning on Friday, September 17th at 5PM on Facebook, every day we’re going to be premiering a newly filmed performance of a different monologue or scene from across the Shakespearian cannon. Each video features a different featured local performer (or group or performers) and will be filmed in a different location on museum grounds! After our final featured performance premieres, we are going to collate all these performances into a single YouTube premiere on Sunday, September 26 at 7PM! Below is the lineup of scenes and performers we’ll be featuring: 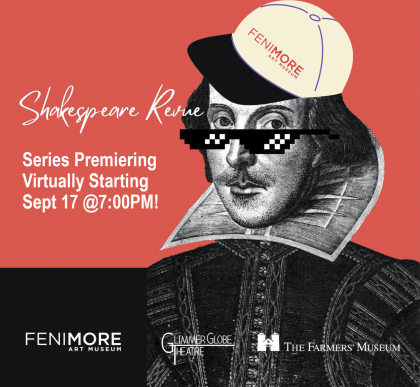