No tickets will be sold after that time. An email will then be sent to all registrants containing the link, Meeting ID and Password.


At this pivotal time in our nation’s history and just two days before a major presidential election, Fenimore presents a very special virtual guided tour featuring a live Q&A session with former Chief Official White House Photographer Pete Souza. This virtual program takes place on Sunday, November 1, at 2:00 p.m. via Zoom. Mr. Souza will answer questions from tour participants relating to his exhibition Pete Souza: Two Presidents, One Photographer. The exhibition is currently on view at Fenimore through December 31. This virtual program features a 20 minute walking video tour of the exhibition with an in-depth discussion on Souza’s photographs, followed by a 20-30 minute live Q&A session. The program is free, but please consider a suggested donation of $20.00 to help support future online initiatives at Fenimore. Registration is required.

To register for the virtual tour, visit FenimoreArt.org or go directly to Eventbrite.com. Once you sign-up, you will receive a link and passcode via e-mail. You will need Zoom installed on your computer or mobile device to join the tour. (You can sign up for a free Zoom account at zoom.us.) Log into Zoom before the tour begins at 2:00 p.m. There is no charge for the tour, however, please consider a donation of $20 or more to help us provide future online initiatives.

Other virtual gallery tours are scheduled through December, but this is the only tour featuring a live Q&A with Pete Souza.

Two Presidents, One Photographer showcases 56 of Pete Souza’s photographs of two presidents from opposite ends of the political spectrum. This exhibit includes Souza’s favorite images of Presidents Obama and Reagan, providing us with candid moments that are windows into their humanity. What we see in Souza’s photographs are two Presidents who clearly respected the office they held, and genuinely respected the people they interacted with, no matter the circumstance. (The exhibition was organized by art2art Circulating Exhibitions.)

Pete Souza is a best-selling author, speaker and freelance photographer based in Madison, Wisconsin. He is also Professor Emeritus of Visual Communication at Ohio University. Souza was the Chief Official White House Photographer for President Obama and the Director of the White House photo office.  His book, “Obama: An Intimate Portrait,” was published by Little, Brown & Company in 2017, and debuted at #1 on the New York Times bestseller list. A new documentary ‘The Way I See It,’ which features Souza speaking on his iconic photographs of both Obama and Reagan, premiered recently on MSNBC. 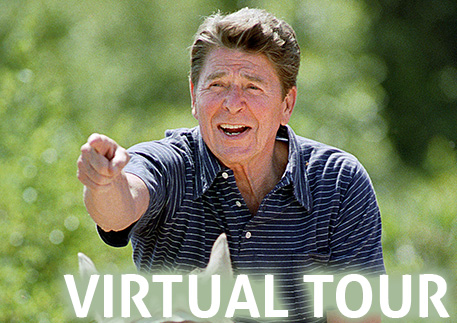