The Flight of Jackie Cochran — A Solo Performance (CANCELED)

This program has been canceled.

An inspiring solo performance about the life of Jackie Cochran, a record-breaking WASP (Women’s Airforce Service Pilot) during WWII!

Glimmer Globe Theatre is proud to present award-winning playwright and performer Nancy Hasty, in her one-woman show about the incredible life of Jackie Cochran, one of the most decorated pilots in the history of aviation:

Jackie Cochran was born in 1906 in what is now a “ghost town.” She wore flour sacks and went barefoot most of her young life, and was schooled only until the second grade. She knew poverty, hunger and deprivation first hand.

How did this dirty, fierce, uneducated child grow up to be the first woman to break the sound barrier, with Chuck Yeager as her wingman? How did she win the most prestigious air race in the world, the 1936 Bendix Transcontinental, besting both women and men? How did she wind up being the Commander of the W.A.S.P.s during WWII? How did Jackie Cochran, by her life’s end at the age of 74, manage to set more speed, distance and altitude records than anyone – male or female – in the history of aviation?

After founding her own cosmetics business, she was named Business Woman of the Year by the Associated Press,lectured at Harvard, received honorary doctorates, became friends with presidents, dined with prime ministers and royalty. She married Floyd Odlum, one of the richest men in America.

It seemed too good to be true. And some of it wasn’t.

Nancy Hasty’s plays have been produced in New York, internationally, regionally and on tour. Her play, The Director, starring John Shea, ran off-Broadway for over six months to critical and popular acclaim, winning “Highly Recommended” status from The New York Times. Florida Girls, Nancy’s one-woman show, toured the U.S. after its off-Broadway run and she continues to perform it around the country. Her play, Lawnchairs, was the first place winner of the Jerry Kaufman Playwriting Award, presented by the American Renaissance Theatre Company in New York. The following year, Lawnchairs premiered at Pennsylvania’s Electric Theatre Company. Bobbi Boland ran off-Broadway with Nancy in the lead before being optioned for Broadway. Yankee Women, another original one-woman show, was developed at The West Bank Downstairs Theater Bar and subsequently played venues around the country. Nancy’s work has been presented in New York at Primary Stages, the ArcLight Theatre, Dixon Place, the Colonnades and numerous others.

“The Flight of Jackie Cochran,” Nancy’s newest play, began its development at the Spanish Trail Playhouse in Chipley, Florida two years ago. Since that time it has been presented at Florida State University, Pensacola State College, Warehouse 360 in Santa Rosa Beach, Florida, as well as traveling to venues in Maine, Connecticut and Pennsylvania. The play was based on the book “Jacqueline Cochran, Superwoman,” written by her niece, Billie Pittman Ayers, and Beth Dees. The play has not only garnered great acclaim from audiences, it has also won the approval and support of Jackie’s family members.

In addition to writing and performing, Nancy has served as artist-in-residence/playwright-in-residence at numerous colleges and schools in the Northeast. In the prison system, she has taught Shakespeare, acting and writing to adult County, State and Federal inmates. In the Lackawanna County Prison, she directed four original works in her award-winning arts program. She has also directed numerous programs for at-risk youth, adjudicated teens and former inmates. For this work, she was named “Artist of the Year” by the Pennsylvania Council on the Arts and the NEIU 19. In Florida, she founded the “No Limits Theatre Company,” made up of actors with developmental disabilities, at The Arc of Walton County.

“The Flight of Jacqueline Cochran”
Written and performed by Nancy Hasty

“Although Cochran’s face has graced a postage stamp, an airport in Riverside County, California, and was a recipient of many military and business awards, many still won’t recognize the name in the title of Hasty’s play. By the end of it, however, every audience member will remember the name, Jackie Cochran.”
Northwest Florida Daily News

“…exhilarating and lovely performance…in awe what you (and Jackie) have done. Mom (Jackie’s niece and author of “Jacqueline Cochran, Superwoman”) is so proud. Thank you.
Jackie Cochran’s great niece, Vicki Pittman Ayers

“Still thinking about the play and loving every minute of it! I hope it continues for a long time. Such an honor!”
Jackie Cochran’s great-niece, Sharon Pittman Rawlings

“WOW!!! You are a great Jackie. You were bigger than life…like Jackie! I found it superb…powerful. I’m eager to know what’s next!!! Congratulations! It delighted me as a co-writer to see the story brought to life in such a different way. With admiration…“
Beth Dees, co-Author of “Jacqueline Cochran Superwoman”

“Amazing to see her transform into Jackie before our eyes. Her depictions were spot on!”
Jan Conner, former employee of Jackie Cochran

“The performance last night took my breath away. Nancy immediately captured me with the presence of Jackie Cochran. I knew I was in for it, spellbound, as Jackie told her story. Shakespearean themes abound, the title alone takes on new meaning before it’s over. (A) rich and unforgettable experience.”
Sharon Allen, Guildford, CT

All I kept thinking during the entire performance was why I had never really heard of Jackie Cochran and why??? She and her life were amazing. These are important people that all of us should be learning about in school. Definitely buying an autobiographical Book because Nancy’s fascinating performance stimulated my mind and made me yearn for more information. Well done Nancy Hasty. Bravo!
Sharon Lefebvre Smith, Santa Rosa Beach FL

What an exhilarating performance it was! We talked all the way home about the character and the intensity of your skills in performing her. The simplicity of the set and the monochromatic element of your costume, structured all of the attention to the inner workings of the character. For two hours you had the entire room in the palm of your hand, hardly breathing at some points lest it disturb the mood. You brought us along through the pain, the defiance, the successes, the love and the accomplishments. As we said on the way back, you made us believe that it was Jackie up there telling her story.
Brenda Fleming, Shalimar, FL

What an extraordinary performance…You took me on a roller coaster ride of emotions, Nancy Hasty. Jackie Cochran was a true “steel magnolia” and your stellar performance was powerful yet tender. I LOVED each and every moment!!!
Rena Martens Anderson, Santa Rosa Beach FL

I was totally immersed in Jackie’s story from the very beginning of the play. And, I was so impressed with Nancy’s portrayal of this fascinating woman. Outstanding!
Debbie Taylor, Santa Rosa Beach FL

Nancy Hasty, you portray this wonderful woman on a single stage with the chair and that was the only prop! What a fantastic job and exhilarating story! This fabulous Jackie Cochran needs to be known and all her accomplishments as an aviator from NWF!! Thank you for bringing it to life
Kelly Cline Turner, Santa Rosa Beach FL

Was a great one woman performance!!!!!! Kept everyone on the edge of their seats!
Kathy Kruse Barry, Santa Rosa Beach FL

We, as a society and a center of aviation have done a disservice to a pioneer of industry and aviation. I felt like I missed a huge piece of history in my education, however after reading the responses from Nancy’s brilliant performance we all may have been slighted.
Denise Song, Santa Rosa Beach FL

This play was amazing in every way. Both Nancy and Jackie are powerful women. Thank you Nancy for telling us this amazing story. I really don’t understand how Jackie could live in the panhandle and we have never heard her story. Her life should definitely be made into a movie, especially at this time in our society. Jackie and Nancy Hasty both are the real thing…role models!!!
Julie Morrell

Mesmerizing! I had to remind myself that it was not actually Jackie Cochran on stage sharing with us her life history, of which many of us were unaware that she even existed, but a very talented actress named Nancy Hasty. There were parallels in the story that left me feeling a sense of kinship with the character. Unabashed, the message was clear…keep pushing, never stop, and never take no for an answer…stand firm in a place you love and not where others would have you stand. I am anxious to learn more about this woman that time forgot. Thank you Nancy Hasty (and Rena) for bringing us her story.
Karen Mosley Hineman, Santa Rosa Beach FL 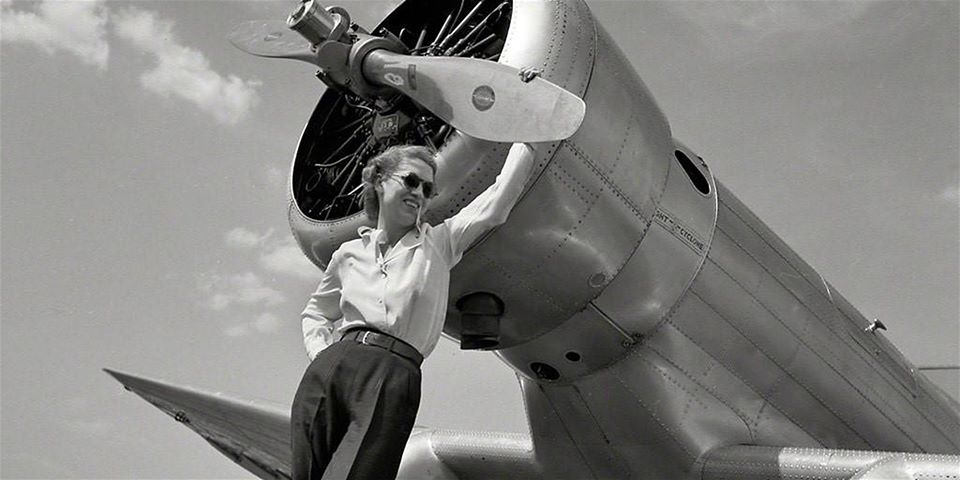