Taming of the Shrew

By Kerrie Tandle
Posted February 26, 2019
In
Taming of the Shrew2019-02-262019-07-05https://www.fenimoreartmuseum.org/wp-content/uploads/2018/01/fenimorelogo_red-1.svgFenimore Art Museumhttps://www.fenimoreartmuseum.org/wp-content/uploads/2018/01/fenimorelogo_red-1.svg200px200px
Fenimore Art Museum’s Glimmer Globe Theatre is preparing an exceptional season of live main stage productions in its Lucy B. Hamilton Amphitheater for the Summer of 2019: In July, we present William Shakespeare’s inflaming Taming of the Shrew, followed by Thornton Wilder’s beloved Our Town in August.  This comes after profoundly successful productions of Macbeth (2015), The Crucible (2016), A Midsummer Night’s Dream (2017), Othello (2018), and The Importance of Being Earnest (2018) in the same venue.

Taming of the Shrew is considered one of Shakespeare’s “problem plays,” specifically because it explores women’s role in marriage and society in ways that are at once side-splittingly funny and deeply controversial.  Our interpretation of the play will be playful and bold, tackling the themes head-on so that audiences will be entertained but also provoked to think, to debate, and to question. Michael Henrici will direct and play the male lead, Petruchio, opposite his wife, Danielle Henrici, as Kate.  They will be joined on stage by a superb cast of local actors.

Andie Alban is a returning face at Glimmer Globe Theater, Grumio being her second role on stage. Previous to this she portrayed Emilia in Othello. Andie teaches art and graphic design at ONC BOCES in Milford, and is a professional artist besides that. She would like to thank Danielle and Michael Henrici, and Mike Tamburrino for their kindness and patience, and a thank you to her talented castmates as well! Finally, she would like to thank her family for their enthusiasm.

Natalie Davis has been featured in many Cooperstown High School performances with both ensemble roles as well as main roles. Highlights include Annie, where she performed as Miss. Hannibal, as well as Harvey as Veta Louise Simmons, and Honk! As Ida. This is her first theatrical performance outside of the school setting, and she would like to thank not only her directors Danielle and Mike Henrici, but also Lauren and Mike Tamburrino, for being supportive throughout this entirely new and exciting experience.

Peter Exton (Gremio/Tailor) is making his third appearance with Glimmer Globe Theater. He previously played multiple roles in both Othello and A Midsummer Night’s Dream. Exton is a veteran performer, having first stepped on a stage more than fifty years ago. In the 1970s he was a club performer in the DC area, performing in many venues including the famous Cellar Door. More recently, Exton has acted in plays and musicals, appearing in many Orpheus Theatre productions in Oneonta, including Peter Pan, Guys and Dolls, A Funny Thing Happened on the Way to the Forum, Oliver!, Grease, and 42nd Street. He has twice played Marley’s Ghost in A Christmas Carol at the Farmers Museum; earlier he went airborne in the same role for Orpheus Theatre (his flight crew included the ever-versatile Michael Henrici). Exton lives in Oneonta with his wife Ellen Blaisdell; they are the proud parents of two adult children, Maggie and Sasha.

Danielle Henrici (Kate) is the Founder and Co-Artistic Director of Glimmer Globe Theatre. Danielle studied acting at New York University and holds a Master’s Degree in Educational Theatre. She worked as an actor, producer, theater teacher, theater manager, and model in Manhattan for seven years before moving to Cooperstown in 2010 and is a proud member of the Actors’ Equity Association. Favorite acting credits include A Streetcar Named Desire, Laundry and Bourbon, Three Sisters, The Cherry Orchard, Twelfth Night, Much Ado About Nothing, A Christmas Carol, A Midsummer Night’s Dream, Line, Proof, Love, Loss, and What I Wore, Macbeth, The Crucible, and Othello. Favorite directing credits include The Compleat Works of Wllm Shkspr abridged (Revised), Lone Star, and A Christmas Carol. Mom, Dad, Pete, and Judi: You make it possible for us to do this – thank you for supporting us from the moment we started dreaming and for taking such loving care of our babies. Dash and Vivi, my hearts, I can hardly believe you’re real. It might seem odd to dedicate my performance in this particular show to a newborn daughter, but it makes sense to me! Michael, so grateful I found you. Tamed.

Michael Henrici is a Cooperstown native and Co-Artistic Director of Glimmer Globe. He started his career locally with the Leatherstocking Theatre Co. (Brighton Beach Memoirs, Sleuth). Michael went on to study acting at the American Academy of Dramatic Arts (The Winter’s Tale). Upon graduating, he was selected as a member of the 2009 Academy Company (Mrs. Warren’s Profession, Beggars in the House of Plenty) returning as a guest artist in 2010 (The Crucible). While in NYC Michael worked with the Queens Players (Macbeth, As You Like It) and Inky Cloak Productions (Hamlet). Credits with Glimmer Globe include A Christmas Carol, Macbeth, The Crucible, and Othello. He currently serves as Otsego County Commissioner of Elections (D) and lives in Phoenix Mills with his wife Danielle, and children Dashiell and Vivienne.

Regina Lassiter is a rising junior at Cornell University. There, she has managed and done publicity for Risley Theatre as well as appearing in university shows. She graduated from Cooperstown where she appeared in Into the Woods (Witch) and Drowsy Chaperone (Mrs. Tottendale) among others. She would like to thank the Noto’s for all the rides home and the Henrici’s for this wonderful opportunity.

Carl Loewenguth is a singer-songwriter with the funk band Hanzolo. This is his third season performing with Glimmerglobe. His past roles include Earnest in The Importance of Being Earnest, Demetrius in Midsummer Night’s Dream, and Cassio in Othello.

Glen Noto has been an American History teacher and coach for forty-two years, the last seventeen at Cooperstown Central School. After a lifetime of involvement in athletics as a player and coach, he is making his stage debut, playing Vincentio. Glen is looking forward to appearing on stage with his daughter, Maria, who is playing Bianca.

Maria Noto is currently a rising Junior at Wesleyan University, studying Theatre, Film and Writing. This summer, Maria is a cast member of both “The Taming of the Shrew,” in which she plays Bianca, and “Our Town,” portraying Emily Webb. When not performing or rehearsing this summer, Maria is an intern at Part2Pictures, a documentary based film company, in Brooklyn. Other productions she has been a part of in the Cooperstown area include Glimmerglass Festival’s “West Side Story,” and Glimmer Globe’s “A Midsummer Night’s Dream.” She would like to thank her family and friends for their continuous support.”

Carolyn Reid studied theatre at School of Fine Arts, UConn, specializing in scene design. She has participated extensively at Studio 24 in Syracuse in workshops and private coaching under direction of Gerard Moses. Performances at Studio 24 include Macbeth, Iago, Lady Bracknell and Richard III. She also writes historical drama.

Brandon Rothstein is currently studying at SUNY Oneonta. This is his Theatrical Debut! Brandon is from Long Island New York. He would like to thank Danielle Henrici for providing him with an opportunity to explore something new.

Weened on Rodgers & Hammerstein musicals in high school, Scott West spent most of his adult life slumming in other arts–singing choir with Albany Pro Musica, and competing ballroom at the Ohio Star Ball–before returning the glory of the stage recently. He happily trades summers with Glimmerglobe–Danforth in The Crucible, Algernon in The Importance of Being Earnest–with Fall and Spring with Catskill Community Players–The Major in Bloody Murder, Vanya in Vanya and Sonja and Masha and Spike. Mostly harmless. 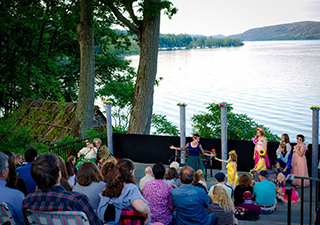