The History of ‘Twas the Night Before Christmas’

“Twas The Night Before Christmas” was read aloud for the first time on Christmas Eve, 1822; it was subsequently published by the Troy Sentinel newspaper on December 23, 1823. The much-loved poem celebrates its 200th anniversary this holiday season. To mark the bicentennial, a new book by author Pamela McColl presents the stories behind the masterpiece. Join Pamela at Fenimore Art Museum on Tuesday, November 29th as she presents the life and times of the poet Clement C. Moore and the poem’s own story, including its publishing history, its remarkable rise in popularity, and the thousands of editions of the magical lines that have been released in book format. Pamela McColl, author/historian/collector and authority on the popular poem, spent a decade researching the material for her new book “Twas The Night – The Art and History of the Classic Christmas Poem.” In her presentation at the Fenimore, she will share interesting discoveries that link the poem to other early 19th century writers including Washington Irving and James Fenimore Cooper. Pamela will finish her presentation with a review of the ways in which great artists and illustrators of the 19th and 20th centuries (like Norman Rockwell, NC Wyeth, Jessie Willcox Smith,  W.W. Denslow, and Andy Warhol) were inspired by the classic Christmas poem.

There will be time for questions and answers. Patrons are invited to ask questions pertaining to collecting editions of the poem – a popular pastime for many enthusiasts of “Twas The Night Before Christmas.”

About the Author
In 2012, Pamela McColl created a media firestorm for her smoke-free/pipe-free edition of the poem: “Twas The Night Before Christmas edited by Santa Claus for the Benefit of Children of the 21st Century.“ McColl (B.A. North American history) is a corporate art consultant/author/publisher. Bicentennial celebrations in honor of the poem are planned for holiday seasons 2022/2023. McColl plans to tour New York, Rhode Island, Massachusetts, and Connecticut in the fall of 2022. 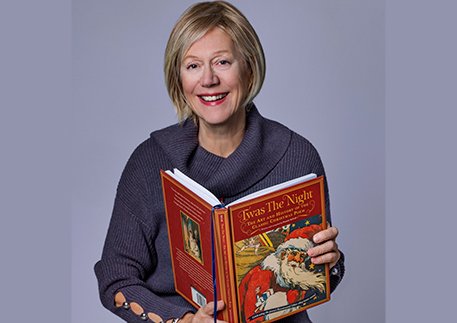