A LIVE Storytime and Q&A via Zoom featuring author and illustrator Marc Brown – Creator of Arthur
Saturday, October 23 • 10:30 a.m.
Program is free of charge with a suggested donation of $15
Reserve a spot at Eventbrite.com

Join us via Zoom for this one-time only, special LIVE event featuring the creator of the well-known children’s character Arthur–author and illustrator Marc Brown. In celebration of the current exhibition, Believe in Yourself: What We Learned From Arthur, Brown will discuss his popular character, read from one of his books, and answer audience questions. This live program takes place Saturday, October 23 at 10:30 a.m.

The program is provided free of charge with a suggested donation of $15 per household. Donations allow Fenimore Art Museum to continue offering programs such as this in the future.

This program requires an internet connection and Zoom software. A link to the Zoom session will be emailed to all registrants the day before the program to the address used to register for the program.

The exhibition, Believe in Yourself: What we Learned from Arthur is sponsored in part by Nellie and Robert Gipson, WCNY, and WMHT.

Marc Brown has had many jobs… truck driver, short-order cook, TV art director, and a college professor. When the college closed he was rescued by an aardvark who appeared one night while telling his son a bedtime story. That bedtime story became his first book, ARTHUR’S NOSE. Then a series of books which became the longest running animated children’s program in history. He is a #1 New York Times bestselling author, winner of three Emmy Awards, the George Foster Peabody Award and most recently, the Television Critics Award for the episode, Mr. Ratburn and the Special Someone. Next year he celebrates two anniversaries, 25 years of Arthur on PBS and 45 years of children around the world reading Arthur books. 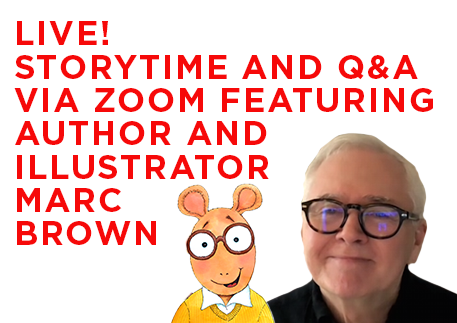